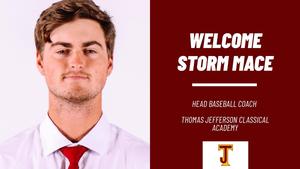 AVONDALE -- TJCA is excited to announce the hiring of Storm Mace as the new head varsity baseball coach. Mace comes to TJCA after a successful high school and college career.

Mace won a state championship at East Rutherford, playing all four years. He then attended Catawba Valley Community College for two years, earning the role of team captain. Storm then continued his baseball career at Division I Radford University, where he recently graduated.

"I'm excited for the opportunity to lead the baseball program at TJCA,” said Mace. “I'm eager to get to work with these kids and have a successful season.”

TJCA Athletic Director Steven Jones is excited about the hire.

"Storm stood out in the hiring process,” said Jones. “He is young, energetic, and brings a wealth of baseball knowledge to our program. He will be a player's coach that works well with our student-athletes and will help take our baseball program to the next level.”