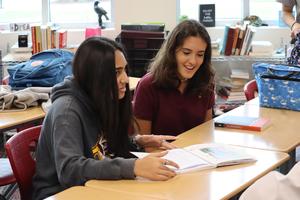 AVONDALE — For many students, the first few days of school can be intimidating, but there is comfort because many times it is a familiar place and there are familiar people, but for Louise Royer Costil, she had neither.

Louise is from the southern part of France and for most of her life, she has grown up near the Mediterranean Sea. But for the past two weeks, she has been in the United States, visiting quaint Rutherford County, and studying at Thomas Jefferson Classical Academy (TJCA). Her arrival to the states featured many new experiences. She rode in the back of a pickup truck, hiked in the mountains of Western North Carolina, saw alligators, visited the Rutherfordton Fire Department, and even climbed up the ladder on one of the trucks.

She visited Shelby and fell in love with the city.

“In France, there are more people living in the middle of the city, here it is more wide open,” said Louise. “It is beautiful.”

Louise even acquired a TJCA polo and began taking academic courses on the first day of school. Throughout the next nine days, she would immerse herself in TJCA academia, attending classes that ranged from US Government to Human Anatomy to Logic.

“It was so much fun,” said Louise. “School here is different than it is in France. The teacher-student relationship is different because you are able to be friends with your teacher here.”

Of all of her studies, Rhetoric with Mr. Stearns was her favorite class.

“People had different points of view and it made it so fun and interesting because, in France, most people have the same points of view, so it was different,” she said.

Her experiences at TJCA extended outside of the classroom as well. Louise was able to practice with both the cross country team and the volleyball team.

“I had never really played volleyball before, but everyone was really kind to me and it made it so enjoyable,” said Louise. “The teams have such a family environment.”

All in all, Louise called the experience great and says she would love to do it again.

“I love to try new things, good and bad,” she said. “I love discovering new places and I am really happy to meet new people. I would love to travel again, especially if the people there are as nice as they are at TJCA.

“I hope my friends here come to see me in France,” she added with a smile.