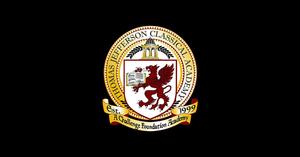 Jason Cole will serve as the High School Principal, and Jodi Isaacs as the Middle School Principal and they will share executive leadership responsibilities at Thomas Jefferson Classical Academy. They are excited to partner in the continuous pursuit of the school's strategic goals, which include nurturing a culture of excellence that will prepare students for a lifetime of citizenship, upholding extraordinary academic and curricular standards that promote active intellectual inquiry, and strategically allocating resources to support the TJCA mission.

Jason Cole was hired at TJCA in 2000, just one year after it opened, and has continued to serve the school in multiple ways for the last 22 years. He taught Earth Science (8th grade), Biology (9th grade), and AP Biology (11th and 12th grade) from 2000 to 2009. During his years at the high school, Mr. Cole was an integral part of building the athletic program. He served as the head coach for the varsity basketball and volleyball teams and led both to conference championships. Over the years, Mr. Cole also assisted with coaching football, baseball, and basketball. While at the Upper Campus, Mr. Cole held the title of Facilities Director and has extensive experience in all aspects of school operations. In 2009, he was named Principal of the Thomas Jefferson Classical Academy Grammar School in Forest City and remained in that leadership position through the 2021-2022 school year. In addition to his contributions to TJCA, Mr. Cole has served on various charter school boards in North and South Carolina.

"I have devoted my career to charter schools because I know they make a difference in students' and families' lives," said Cole. "I also believe they produce engaged citizens who positively impact our communities."

Mr. Cole earned a Bachelor of Science in Biology with minors in Chemistry and Education and a Master of Arts in Education Administration from Gardner-Webb University. He holds a North Carolina professional educator's license in Biology and School Administration, K-12. He is a Rutherford County native and has two daughters who benefited from the outstanding educational opportunities at TJCA.

Mrs. Jodi Isaacs will be a new face in the TJCA family. She brings with her a significant amount of charter school experience. Most recently, Mrs. Isaacs served as the Chief of Staff at GREEN Charter Schools in South Carolina. She played an integral part in developing the strategic plan that led the school from one campus in Greenville to five campuses across the state. Mrs. Isaacs led the state approval process for four of the five schools while spearheading many other school initiatives.

Mrs. Isaacs has written and secured grants in excess of one million dollars and developed the K-12 STEM curriculum for GREEN Charter. Mrs. Isaacs created the curriculum to align with GREEN's mission of educating children with engaging opportunities focused on sustainability, energy, and the environment. In addition, she insured district compliance for approximately 2,000 students across South Carolina and coordinated the required accreditation processes.

Mrs. Isaacs also believes strongly in the value of charter schools as a way for families to have a challenging and safe alternative to their zoned schools. Her strengths include working collaboratively with teachers, parents, and staff to fulfill the needs of each student in an academic environment that is engaging and meaningful. She recognizes that not all students learn in the same way, and she believes in giving teachers the freedom and resources to meet students at their current academic level to maximize the potential of each student. She has over 20 years of experience in education and has been a classroom teacher at the elementary, middle, and high school levels.

"I value teachers, and I am in awe of their strength and stamina in navigating the challenges of the classroom, especially through the last few years," said Isaacs. "I look forward to working with stakeholders to make Thomas Jefferson Classical Academy the best it can be."

Mrs. Isaacs earned her bachelor's degree in Elementary/Early Childhood Education from Wilmington College. She is certified to teach in Virginia and South Carolina. She is a state-certified T 4.0 evaluator in South Carolina and certified Career Development Facilitator. She and her husband, Jack, are both from Delaware. They enjoy spending time at the beach in their RV and skiing in the winter. They have two children, Trey and Lucy, who were born in January and December of 2005.

Please join us in welcoming Mr. Cole and Mrs. Isaacs into their new collaborative leadership roles at Thomas Jefferson Classical Academy. There will be a meet and greet in the Upper Campus Media Center on July 14, 2022, at 6 p.m. for TJCA families.

TJCA is opening a search for a Grammar School principal. Mr. Cole will continue to support the existing administrative team until the position is filled.