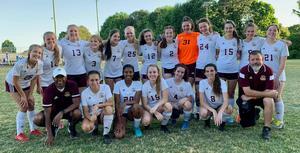 Selma McMurry scored three goals in the win, while Margaret Schweppe added two more. Kaitlyn Rowe and Sophie Smart were responsible for the other two goals as each scored once.

The Lady Gryphons close out regular season play today at Bessemer City. TJCA would capture at least a share of the conference championship with a win.