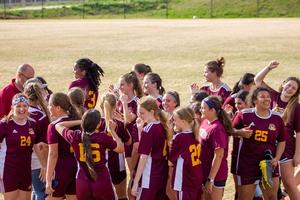 Next up for the Lady Gryphons will be the first round of the Tri-County playoffs, which TJCA will host. More information will be provided once it is finalized.

After compiling a 9-2 regular-season record, including a 9-0 conference record, the TJCA men’s varsity tennis team earned a spot in the 1A team dual playoffs. The fifth-seeded Gryphons will host South Stokes at Gardner-Webb University at 4 p.m. on Wednesday.