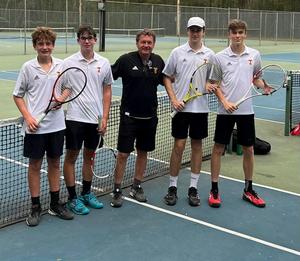 At the end of the day, two singles players (Charlie Schweppe and James Hamrick) along with one doubles team (Lukas Hobbs and Aidan O’Reilly) qualified for the 1A West Regional Tournament, which will begin on April 29 at Elkin High School.