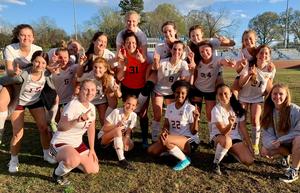 The team will participate in the conference tournament on Wednesday. The win improved the Gryphons' record to 9-2 on the season and 9-0 in conference play.

The women’s soccer team defeated Cherryville 9-0 on Thursday. Margaret Schweppe and Selma McMurry each earned a hat trick, scoring three goals each, while Sophie Smart, Rayney Maxwell, and Jazelle Martinez each scored once to account for the nine goals.

The middle school baseball team fell to Chase on Thursday, but Landry Ohmstead was a force on the mound, striking out nine batters. Ohmstead, Alton Freeman, Colt Maxwell, and Jase Warner all picked up base knocks.