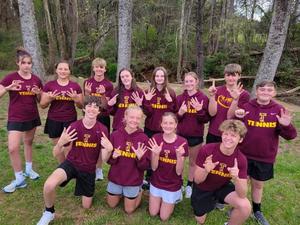 The middle school tennis team capped off regular season play on Monday with a 9-0 win. The win completed a perfect 6-0 regular season for the Gryphons.

The Gryphons will host Crest on Wednesday, April 13 for the Tri-County Conference Championship.

The middle school girls soccer team won its match 5-0. Emerson Taylor captured the hat trick, scoring three times to go along with a goal each from Emma Byers and Sophia Bell. The Lady Gryphons’ next match will be at home on Wednesday against Crest.

The middle school baseball team played hard on Monday but ultimately fell to the Knights.