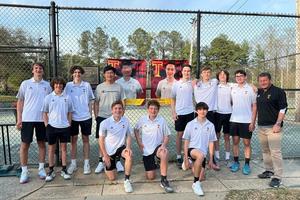 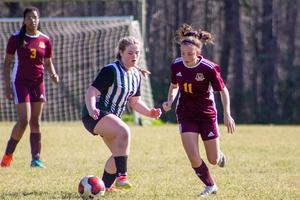 AVONDALE — The Thomas Jefferson Classical Academy (TJCA) varsity girls soccer team improved to 3-1 in conference play on the year with a 4-2 win over Shelby on Tuesday night.

The Lady Gryphons were led by Selma McCurry and Margaret Schweppe, who scored two goals each. TJCA will face a stiff test on Thursday when it travels to conference leader Burns. The match will begin at 5:30 p.m.

The men’s varsity tennis team celebrated Senior Night in style with a 7-2 win over Burns to create some separation in the conference standings. Charlie Schweppe, Lukas Hobbs, Hunter Plaster and Turner Cook were all victorious in their singles match. The duos of Schweppe and James Hamrick, Aidan O’Reilly and Hobbs and Cook and Nathan Jiang were victorious in doubles play.

The Gryphons have a quick turnaround as they travel to Burns today to finish a suspended match from earlier in the season.

The middle school girls soccer team remained undefeated on the year on Tuesday with a 5-1 win over East Rutherford Middle School. Emerson Taylor led the charge with two goals, while Ella Duncan, Sophia Bell and Emma Byers scored one goal each to account for the 5-1 final. TJCA will travel to Shelby Middle School on Friday for its next match.