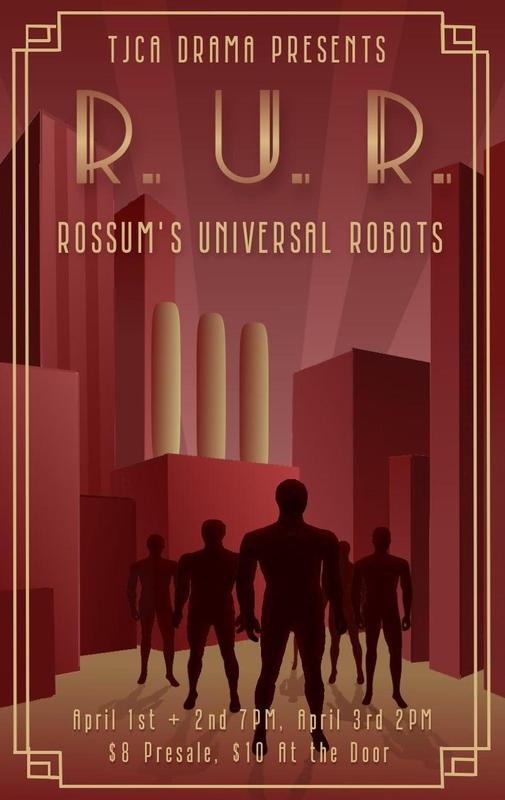 “I try to teach RUR to my 6th-graders whenever we have time in the class, as it fits in so well with the Core Knowledge curriculum,” he said. “It ties in themes of the Industrial Revolution, Globalization, Nationalism, automation, and it really does a great job of front-loading the 7th-grade curriculum, as their social studies focus in seventh grade is World War I and World War II. The play was written in 1920 by Karel Capek, who lived through WWI and had a lot to say about the mechanization of life in general and war in particular. My seniors all did this play in class with me when they were in sixth grade and have been wanting to perform it ever since.”

“In our version, Act I is set in 2070, Act II and III is 2080, and the Epilogue is 2081,” said Foust. “The play follows the management of the company, Rossum's Universal Robots. RUR is the most important and powerful company on Earth, like if Disney and Microsoft had merged. The whole world has become reliant on robots for their labor, and a social justice movement has sprung up to push for robot rights. The play takes place over the span of 11 years as the existence of autonomous robots changes literally every aspect of our lives. Eventually, the classical theme of hubris rears its head, as we see the results of relying too much on the latest technology. The epilogue to this play is really powerful. If you left after Act III, you would think that this play was a tragedy. The epilogue really expresses Capek's optimism and hope for the future of mankind. It is a deeply powerful and hopeful play that went on to inspire stories like Do Androids Dream of Electric Sheep, Terminator, Blade Runner, I Robot, Ex Machina, and many others. This here is the original.”

Foust says his kids have worked hard in preparation for this performance and he is excited to see it all come to fruition.

“I have wanted to perform this play for well over a decade,” he said. “My kids have been wanting to do this show since 2015. We originally planned to do the show in 2020, as that would be the centennial of the writing of the play. The pandemic came along and put a pause on that, so we sat back and waited. I am in that panic mode that all directors are in the week before the show opens, but I am so proud of the kids in this show and all of the work that has gone into it. This is a way different and harder show than Charlie and the Chocolate Factory that we did in the fall. That show is great, but it is a cartoon drawn for kids. This is the magnum opus of a man who survived the first world war and was inspired to write a genre-defining piece that predicted most of the labor and political changes of the next hundred years. Capek didn't live to see WWII, but he predicted much of the horror of it and the situations that made it possible. He also predicted the amazing creative potential and capacity for love that we human beings have within us. This is a serious drama that demands a whole different set of skills, and my kids are up to the challenge.”

Tickets may be purchased beforehand beginning Tuesday, March 29 during lunch to be a part of the magic this coming weekend. Students can pay via cash or check. All tickets bought before 3 p.m. on Friday, April 1 will be $8 each. The cost will be $10 for all tickets purchased after 3 p.m. Seating is not limited, so all three shows will be at full capacity. Performances will be Friday, April 1 and Saturday, April 2 at 7 p.m., while Sunday’s show will be at 2 p.m.