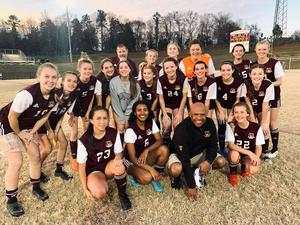 The win improved the Gryphons record to 5-0 in Southern Piedmont 1A/2A Conference (SPC) play. TJCA sits atop the conference standings ahead of 4-0 Burns, who the Gryphons will battle next Tuesday. Prior to that match, TJCA will travel to Crest on Monday for non-conference action.

The Lady Gryphons scored early and often in their win over Highland Tech, netting two goals in the first half and three more in the second half. Lily Wall found the back of the net three times, while Margaret Schweppe added two goals of her own to account for the 5-0 final. TJCA will travel to Shelby on Tuesday. The Lady Gryphons currently sit in third place in the SPC standings with a 2-1 record in conference play.