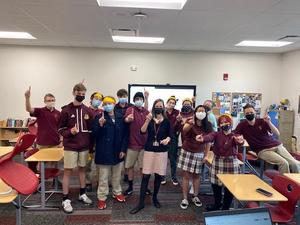 The week of April 17-23 was a very busy and successful one for the Thomas Jefferson Classical Academy High School Academic Team!

On Thursday, they competed virtually in the North Carolina Association for Scholastic Activities “The Twelve” competition and took first place, finishing ahead of perennial top competitors such as the Early College at Guilford and Myers Park High School of Charlotte.

The “A” team had a tremendous performance and finished tied for seventh in the nation! Team members, all juniors, were Dominic Mystkowski, Camden Sloan, Aidan O’Reilly, and Jack Parker. St. Mark’s of Texas finished first.

The “B” Team had a strong showing for a team of all freshmen and sophomores at their first national high school competition. Team members were Maylan Maxwell, Katrina Shauf, Sydney Evans, and Hunter Plaster.

Coach Kimberly Lloyd credits the team’s successes to their ability to work well together and to the diversity of talent this year which allowed them to answer questions on a wide variety of academic and cultural topics.